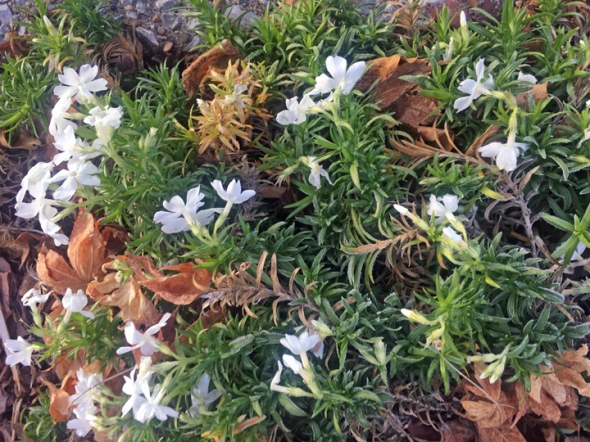 January 1. I open the front blinds and catch a glimpse of pure fresh white appearing against brown, dead earth. I look closer. My phlox is blooming.

Creeping phlox, the Greek word for “flame,” boasts starry flowers—five-point petals densely packed into clusters. Perennials, they are sun-loving, bloom in spring and summer, and spread over rockery or tough clay soil. Their needle-like foliage stays green all year.

Now the green is juxtaposed against the fallen, red-tan leaves of the Japanese maple, the blanched-lifeless strands of leftover butter-yellow day lilies that spend their summers stretching high toward the sun, and the helpless wild geraniums curled in on themselves. The Hawaiian ginger is laid out flat for dead. Atop the green foliage, I see maybe twenty white blooms.

Why now? These little creepers love sun, drought, and heat. Winter is gray, cloudy, mostly wet, with chill. Is their blooming a sign?

“Flame” or fire in some cultures symbolizes God’s radiant glory and holiness and can be used as an instrument of his power. Many cultures view fire as a symbol of wisdom and knowledge.

And so . . . the new year begins, and I step into it seeing a need to look at the earth, at nature all around me, and know God and his ways and wisdom, as he manifests these in his creation. It’s for me to seek and find and know.

A walk to the river became a New Year’s Day tradition when I had my golden retriever and lived in Fieldstone Farms in the late 1990s. I continued the tradition with my first cocker spaniel. A branch of the Harpeth River snaked across the northern edge of the street next to mine, and there are walking trails in Fieldstone, so I’d walk the dog first on the trails and then through an open field of dead, brown grass and dried stalks of weeds to the tree-lined rocky river. We’d stand on the hard-mud bank and watch the trickling flow. 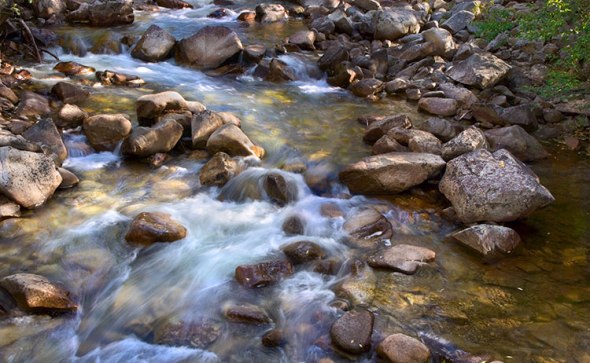 Why a walk to the river? I suppose because a river is a good symbol for life—for the journey we take over the years from one point to a far point in the future, from beginning to destination. A river is good inspiration and shows us how to journey on.

The river has movement. Water keeps flowing onward. No matter what, it keeps going. It doesn’t stop—doesn’t get distracted, doesn’t get down and quit, doesn’t lose its focus and purpose. I wish people were made like that. I’d stand on the path at the edge of Lynnwood Branch and watch the water rush westward, and I’d get caught up in the thought that I should keep moving forward, too, and hopefully, with the same momentum, the same compulsion to “get there,” wherever “there” is.

The river finds a way. Slabs of rock sit beneath the flow, and big rocks and boulders stand in the way of the water, but the river peels off around or over the obstacles, driven to move on. The river keeps going around fallen trees and strainers. The river doesn’t stop at the obstacles and give up. I wish people could do that. People tend to look outside themselves, at others, at a higher being for rescue from obstacles, and not to the power within, like the river does. The river has its own energy and draws from it to get around. We have our own power source, too, without and within at the same time. At the river’s edge, I’d stare at frothy-white riffles pouring around rocks and look for meaning for me.

The river has highs and lows. Just like people do, like I do. Sometimes the river is full, deep, and faster moving, and other times it is low and trickling. Either way, it still has a push to get to its destination, to complete its purpose, to be and do. I need the river’s inspiration.

I live in a section of my new neighborhood that is in a U-shape, bordered by Aenon Creek. So today, January 1, I will continue the tradition of going to the river seeking an example for the new year.  Even though upon awakening it was one degree outside, with a chill factor of a negative five, I will dare to get out of my Cuddl Duds pajamas, wrap up, and walk to the river with my new cocker spaniel. I need to see the creek moving on and finding its way, even though today it might be at a low.

Happy new year to all, and may you find hope and example at the river.