I planted my back yard garden in pots this year. This came out of need—out of frustration and despair over the last two seasons’ results. No yield of tomatoes, cucumbers, cantaloupes. I lost everything I planted to pests, rot, fungus, weeds, and disease. Oftentimes, before those menaces could even get a grip, birds pecked holes and ate the flesh and juice.

I’m a Southern girl. I have to plant things in the dirt and watch them grow. I come from a long line of farmers, from my grandfather back. My father, too, had a garden in his town yard, a yard that was once a fertile Mississippi Delta cotton field before it was a neighborhood. My garden area is small—twelve feet wide and three feet deep, in a corner against the wooden fence.

In the past, come spring, I’d pull weeds, hoe and air the dirt, add some new soil. I’d select my varieties, pick some heirlooms, put in a few cool things like broccoli or Brussels sprouts. I’d water, feed, and wait, and by June, tiny vegetables appeared, and then July brought an onslaught of hundred-degree heat. The plants curled, browned, gave in to it. I gave up, too.

I’ve lived in this house for six gardens. Before I got here, the yard was a pasture, prone to weeds, hard to tame. Beneath the bags of garden soil, conditioner, and humus I’d laid out was clay. There was nothing winning about this combination. The plants growing out of it were small, spindly, and sick.

Pots—my last hope. I bought big plastic terra-cotta-colored ones. Real clay pots were too heavy. I lined them up in my garden space and filled them with new dirt. In the first three, tomatoes. Then cantaloupes, cucumbers, squash, and peppers. I tend them daily, water them, help their vines trail safely. I’ve been blessed with the fruits of their growth.

Having a seasonal garden is like watching before your eyes a sped-up version of life. New tender plants are put in their beds. Watered, fed, watched, fussed over, cared for. Their stalks are straight, leaves green, baby fresh, perfect, no flaws, nothing but potential, a blueprint to fulfill and feel out beyond. Then life comes and brings its good and bad. Plants grow and bloom and produce. Nourished by spring’s sun and rain, they flourish. Then it turns on them and beats them down and rots them out. It’s an all-out attack of the elements and the outside forces that begin to suck the marrow out of life. There’s nothing you can do. You can water with a hose, you can put poison out to kill the bugs, you can cut off the sick and dead parts, but it’s not enough, it’s never enough, and you sit and watch the deterioration, and wait for the decline. Until that once strong and happy life succumbs.

Last summer my friend Nancy gave me some bean seeds to plant. She’d already planted hers along her white picket fence in downtown Franklin. Before the bean pods came, flowering red blooms would appear against the green bean leaves. We’d watch them grow and have fun comparing our bean blooms during our regular get-togethers at Chop House for lunch and poetry and essay reading. Here’s what she said:

“In South Carolina we always grew Scarlett Runner Beans. They can be put on fences, posts, or anything they can climb on, have beautiful red flowers and tons of runner beans. Lots of foliage also. I went to four places here in the Franklin area and none had ever heard of them, so I ordered packs from Burpees. I planted mine along my picket fence and have a packet left. I want you to have them as I know you love flowers, gardens, and anything that is different. So when we meet I’ll bring your packet. They are so easy. Just drop about eight seeds into about a two-inch hole, cover them, and water. Sprouts start showing in about seven days. When the beans appear in about forty days, if you constantly pick them, they are prolific. I am planning on my little white picket fence having bunches of red flowers this summer!” 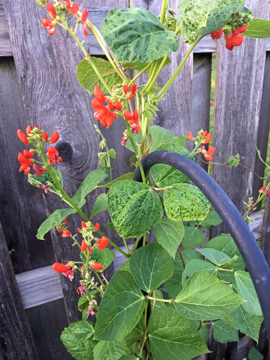 The vines grew and trailed. I watered, waited, and we took pictures and compared, and finally I saw maybe a dozen beans. I picked them and steamed them with some carrots. I watched for more. Then I got distracted with work, with writing, and I grew tired of waiting. This spring, a year later, I pulled all the twining vines off the poles and fence and found a hundred or more bean pods. They were hidden inside all the foliage, had ripened, and were waiting attention that never came because I wasn’t patient enough to tend them every day.

It’s been three weeks since Nancy died. I wish I had another Burpees pack, some red blooms twining up my fence, and some bean pods to look for.

I’m reminded that the season of life may be a season, or it may be years and decades, and it’s never enough, and there’s never enough we can do to sustain it. We just need to remember to always put in all we can, to take hold of all the good we can find, and to get out of life and friendship all we can.

I descend from immigrants.

My fourth great grandfather came here from Ireland. My third great grandfather fought in the resistance and revolution to separate this land from Britain and establish a new country of immigrants. At the end of the war he fought on the frontier, tracking and killing native people, the originals who owned this land.

Here’s what happened to some of America’s first heroes, now rock-stone and dusty bone stiff and piled up in a quiet graveyard of Revolutionary soldiers in Ohio. 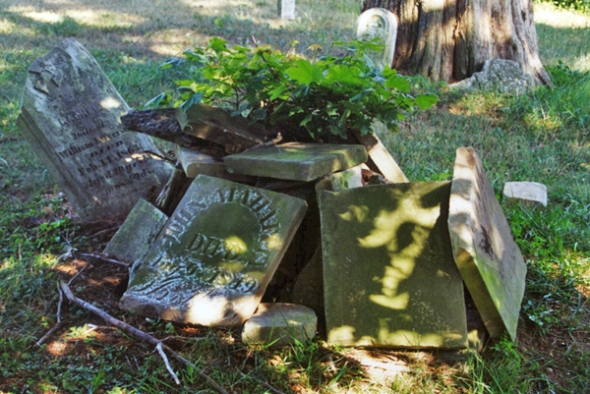 Here is the original stone for my Revolutionary era ancestor. 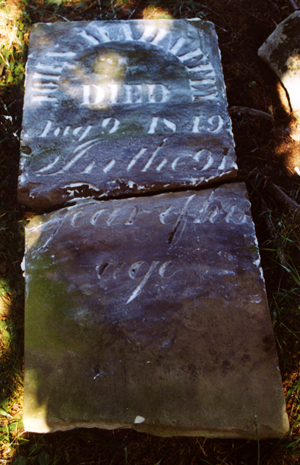 Granted, John Mahaffey did get a new tombstone.

John Mahaffey was born August 31, 1759, in Sussex County, New Jersey, one of seven sons of Scotch-Irish immigrants, Moses and Jennet McIntyre Mahaffey. In the fall of 1774, at the age of 15, John moved with his parents to Cumberland County, Pennsylvania, where they resided two years. In the spring of 1776, near the time of the signing of the Declaration of Independence in nearby Philadelphia, in his seventeenth year, John accompanied his parents to Westmoreland County, Pennsylvania.

The War of Independence began in 1775. John Mahaffey served four voluntary terms, totaling twenty-five months, during the War of the Revolution.

John was almost nineteen years of age when, on July 3, 1778, he originally enlisted for four months. He volunteered for two seven-month periods in April, 1779, and in April, 1780, serving as a “spy or ranger, watching the Indians and giving the earliest information on the approach of the Indians.” During the year 1779, in the frontier settlements of Pennsylvania, British Loyalists and Indians attacked American settlers. The Loyalists soon were defeated, and Americans destroyed many Indian villages whose residents were fighting on the side of the British. The British surrendered October 19, 1781. America was officially independent.

John Mahaffey’s blood now runs through my veins. I take after him. I stand up for this country. I will resist anything that makes her less and harms her, that which keeps us from worshiping in the religion of our choice, that which makes us less equal and takes us toward authoritarianism.