← A Wrinkle in Time
Almost June →

Memorial Day, an essay written in 2003

“ . . . Gather around their sacred remains and garland the passionless mounds above them with choicest flowers of springtime . . . ” [General John Logan, 1868]

The day lilies come back to stay. Honeysuckle and morning glories climb fences and trellises. Impatiens and begonias border sidewalks. Cannas are on the rise. Clover, wild onions, and dandelions spangle the yard.

It’s Memorial Day, the unofficial kick-off of summer. It’s a long weekend, a day off work.

Schools are out, pools are open, and it’s time to clean the patio. It’s time for the first watermelon cutting, time to crank out the first bucket of homemade ice cream. It’s time for cookouts. Time to roll out the grill and slap on some burgers. It’s time for my husband to try out that new steak injector he got for Christmas.

By Memorial Day, my yard is usually in tip-top shape—beds neatly mulched, annuals planted, and pots of geraniums placed on the porch and patio.

Not so this year. Weeds cover the beds like heavy blankets.

Weeds also fill my mind, getting in the way of things I want to do. I can only think about one thing. Dad. He’s ill. In the hospital. Gone from us. I sleep, I cry some, I don’t care about the weeds.

I hate thistle. It spreads everywhere—along roadways, in pastures.  It’s a tall and gangly weed, crooked and awkward. It’s repulsive. It reminds me of a fibroid growing unwanted somewhere.

A thistle is growing in the gravel parking lot behind my office building in Cool Springs. I cut a stalk and lay it on my desk because I feel like looking at something ugly. 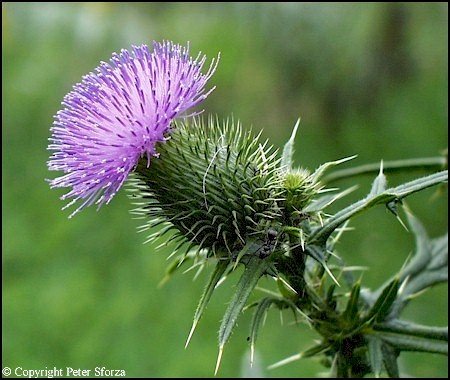 It is spiny and coarse with thorns all up and down it. It has jagged prickly leaves, and on top of rows of prickly bracts, sits a purple flower.

The plant is hard to handle; thorns stick in my flesh and hurt. But the flower is what surprises me. It’s purple, soft, delicate. And it doesn’t belong on that awful stalk.

Shades of purple filaments stick up, ordered in a circle around a center of tiny white seeds in a swirl pattern. The seeds seem protected by the outer hairs that curl gently around them.

I touch the flower to my face. It feels like the big round make-up brush I apply powdered blush with. It leaves inky marks on my cheek.

The flower is quite lovely, its fragrance sweeter than I ever imagined.

More than four million Americans, ten percent of the population over age sixty-five, have dementia, an ugly disease causing a severe loss of thinking and reasoning abilities. The families of those four million people face anguish, frustration, and grief, watching a loved one slowly slip away, even while continuing to live.

Live, meaning to breathe in, breathe out, walk or pace or shuffle, and talk even if it’s only to someone who doesn’t exist. Live, without a shred of quality or an ounce of dignity. Live in the same old body with an altered personality and a new behavior. Live, eventually, some place other than their own home.

Delusions and hallucinations are common, such as believing money has been stolen, a spouse has been unfaithful, or unwelcome guests are living in the house. Those with dementia see and hear people who aren’t really there, and the fantasies are realities that slowly take over their lives.

Having a loved one with dementia is like having a death in the family with no funeral.

Memorial Day is for honoring our nation’s war dead. It’s a day to put flowers on soldiers’ graves and hang the flag in remembrance of those who gave their lives in service to our country.

I have two fourth great-grandfathers and a third great-grandfather who fought in the Revolution. I have a piece of the original tombstone of one of them, placed in a mulched bed in front of a Burning Bush. Maybe I’ll put a flower on it.

Dad served in World War II. He rode with the Great Third Army and General George Patton.  Dad was a sergeant, a frontline medic, and got a Bronze Star with Valor.

“He has terrible memories he will never forget,” Mama said. “When he came home from the war, I listened to him talk day after day until he could sleep and stop shaking.”

“War is a bloody, killing business. You’ve got to spill their blood, or they will spill yours. Rip them up the belly. Shoot them in the guts. When shells are hitting all around you and you wipe the dirt off your face and realize that instead of dirt it’s the blood and guts of what once was your best friend beside you, you’ll know what to do!” Patton said to his troops.

Dad’s dementia has somehow pulled out the war experiences he spent sixty years trying to forget, and they are tormenting him.

War is hell. Soldiers die. Soldiers come home from the battlefront to live among innocents who stick SUPPORT OUR TROOPS ribbons on their cars, and they try to resume normal lives after what they’ve seen and where they’ve been and what they’ve done.