I feel like a little girl again. Perhaps an “old” little girl who appreciates detail, beauty, and meaning.

My fairies arrived yesterday. I feel certain all the neighbors on Elsie Street heard my excited child’s squeal when I saw the box from amazon on my porch. “My fai-ries!” 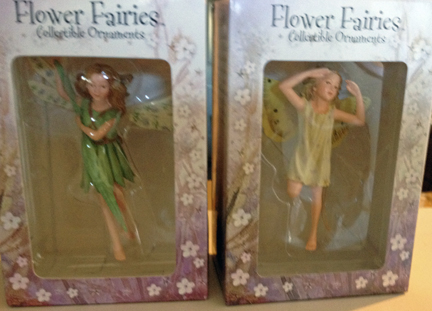 I got the idea of creating a fairy garden from my sister. She’s a master gardener and was doing some spring refreshing of her lovely yard and decided to build a fairy garden. I’d never heard of that, but I thought about it and decided it would be a fun thing to do, something we could build together and compare—her in Memphis, me in Nashville. So I did a quick Amazon search, settled on a few cute fairies, and jumped into this brand new world.

I was expecting three four-inch, doll-like, winged creatures—cute, colorful, a nice addition to the little garden I’d prepared with herbs and perennial flowers and a tiny cottage and rocks I’ve collected on summer trips. I got far more. I have stumbled into a whole fairy realm of beauty. My fairies are collectibles designed by Cicely Mary Barker. They can hang as ornaments or become part of a special garden, sitting on wire picks provided. There are books and prints and poems.

I am deep into this. I woke up at two this morning thinking about my fairies.

Cicely Mary Barker was born in 1895 in Croydon, South London and received her education at home due to ill health. She taught herself to draw and paint and first published a set of postcards when she was sixteen. The publication of a series of Flower Fairies books beginning in 1923 brought her international acclaim as an artist. She produced charming Flower Fairies, botanically accurate illustrations, and accompanying storylike verses. How could I have not known about her works? I must have been reading too much of Alcott and Brink. 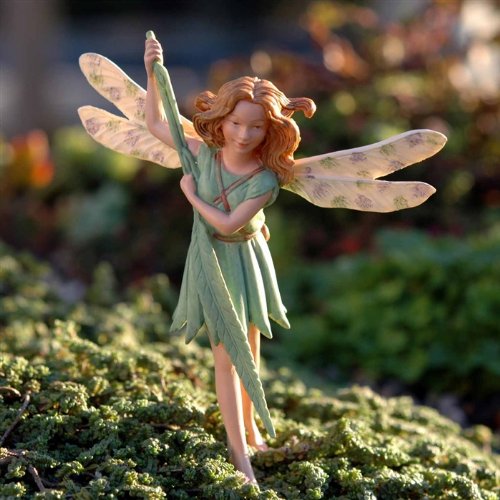 By the peaceful stream or the shady pool
I dip my leaves in the water cool.
Over the water I lean all day,
Where the sticklebacks and the minnows play.

I am shaping this year to be my creative year. Creative with words, yes. But also I plan to get out my oils and paint a mystical Delta scene on canvas. And now I am immersed in creating magical worlds of fairies and flowers—new little friends to visit each morning in my garden. 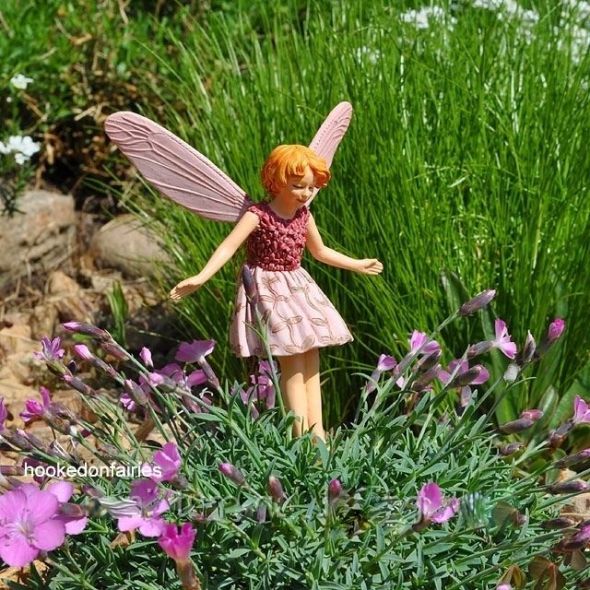 I know a bank where the wild thyme blows,
Where oxlips and the nodding violet grows,
Quite over-canopied with luscious woodbine,
With sweet musk-roses and with eglantine.
[Shakespeare’s A Midsummer Night’s Dream]

I Love It When…

Some people think I’m a negative type of person. I say I’m a realist. I see the whole picture. I see the bad and the good. It’s just that when I talk or write, I tend to go for the bad. Because the good is the good and we don’t need to do anything about that, but the bad could use a little thought and work.

C’mon, people, give me a break here. If a person is a writer, there has to be bad (conflict) spoken of or there’s no story or fullness of life. There’s nothing to work with…without the bad.

I also see the good in the bad and the potential for positive to come from it. When you think about it, that’s what life is made of. Bad things happen to us all, eventually. And we learn to shoulder into them and grow and become stronger and better people.

As a part of my growing and becoming a stronger and better person, even though I’m old as dirt now, I’ve decided to focus on the good for a while. ‘Bout time, huh? Last week on Easter I vowed to find something good and positive every single day and write and speak of it on Facebook.

April 6, 2015
“I LOVE IT WHEN…” (after a grateful Easter holiday, I hope to make this a daily activity!) my kindergarten grandson opens a thick hardback Dick, Jane, and Sally first-grade book I took to him and starts to read to me, sounding out the words as I taught him to do when he was two, and when he gets to the word “shoes” he pronounces it “shows.” Good job, Hardy. You’re right.

April 7, 2015
I LOVE IT WHEN I note that my son’s car tag number is the same as the house number of my growing-up home.

April 8, 2015
Six years ago today, my twin grandchildren were born. I LOVE IT WHEN I visit and they still fight over sitting in my lap. And when two minutes after I walk in the door, Hardy pulls out the three-inch thick Chronicles of Narnia book and reads to me. And then reads from an age-appropriate book. And when Jillian sits close to me and works the activity numbers, letters, and patterns book I took her. I love it that they have a hand in every chore in the household and are happy workers. I love it that they have learned to pick up after themselves and organize their toys in their closets in bins. I love it that they use big words and ask thoughty questions. I am so blessed to have these growing, beautiful children in my life. (I just wish I lived closer!)

April 9, 2015
I LOVE IT WHEN I am unrushed and can take my morning walk and think deeply and do significant planning for my writing project or that of a client. I love it when the sun warms my skin and the breeze brushes against my face. I love it when I can breathe fresh air and feel good. And I love it when my new dogwood comes into bloom for the first time.

April 10, 2015
I LOVE IT WHEN after a snowy, cold, icy winter, I finally get to Authors Circle at Merridees on a Thursday evening. It was good to see, chat with, and plan with Patty, Tom, and Bill.

April 11, 2015
I LOVE IT WHEN my “William Faulkner Iris” blooms for the first time! I’ve had it at my front steps for three years, after a friend acquired it and nurtured it in her yard. (Thank you, Friend!) It originally came from Rowan Oak, Faulkner’s home on 29 acres south of the Square in Oxford, Mississippi. My heart leaps with joy! I grew up one hundred miles from William’s home at Rowan Oak.

Okay, now, so really, without conflict, is this boring, or what?

Hard to believe these babies will be six years old next week! Happy birthday, Jillie Bean and Mr. Hardy. 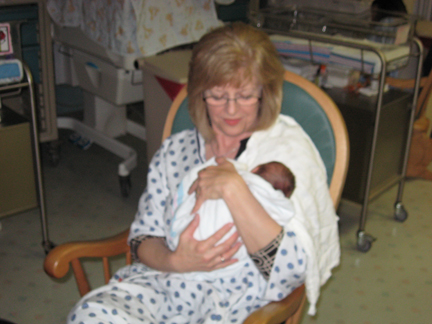 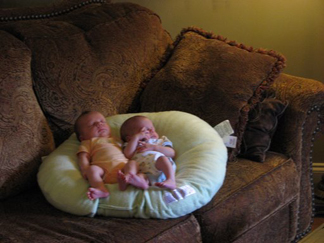 Doubling Up: Jillie and Hardy, 3 months 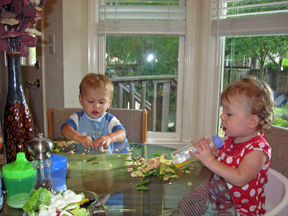 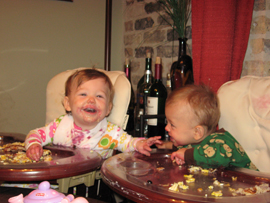 I’ve never lived “single” in my whole life. I’ve always had a daddy or a husband.

But now I’m a woman without her husband for seven years in June. And without her father for nine years as of March 31.

I’ve always heard how single women are taken advantage of. But I didn’t believe it, really. I’ve always had a trusting view of my fellow man and an expectation that everyone will do right. That is my downfall. It always has been.

I never had any qualms about taking care of business alone. Actually, I took care of business when Charlie and I were married. He was busy at the office. I kept the books—office and home—and took care of us financially. I arranged for all the house repairs and purchases of new air conditioners and hot water heaters and such. But . . . he, a man, was always there in the periphery. And Charlie was always quite willing to tell anyone who crossed him that he didn’t give a flying “whatever-word-that-starts-with-an-f” and just fix it. And they always listened to the man.

I thought I could do it. And I can. I am quite capable.

But I cannot fight the system of MAN.

If you are single and taking care of business alone, maybe you have experienced being taken advantage of and maybe not. Maybe life goes perfectly for you. I hope so. I have to say, though, after pushing into it and fighting it for seven years, it is real, it’s out there, you will eventually face it, and you will have to deal with it.

I’ve had more than one person tell me along the way: “They didn’t listen to you because you’re a woman.”

That ruffled my feathers. I don’t want to believe that. But you know what? They were right. There are lots of bad apples out there. Even “nice Christian” bad apples.

Now, don’t get me wrong. There are some good ones. I’ve dealt with some honest businessmen with integrity—my car salesman, employer, financial advisor, realtor, to name a few.

And then there are others, and that’s what I need the blow-up man doll for. A man in the periphery. Don’t mess with me. He will tell you something about a flying something and yell at you to just do it.

It doesn’t sound pretty, does it? Has it ever happened to you? Be honest.

I regret to say I have been bullied by men. I didn’t recognize it for what it was until later. Bullying is when someone uses superior strength or influence to intimidate someone else and force her to accept or do what he wants. I once had seven men stand me down when I pointed out a problem that needed to be fixed. One even screamed at me, red-faced, and spat tobacco juice at my feet: “We ain’t gon do nothin!” Bullying is a method of shutting someone up when you don’t want to do something even if you are legally required to do it.

Bullying hurts. It takes part of your person out of you. You perceive a problem. You know it exists, it is obvious to the naked eye, it needs attention, but you can’t get it acknowledged and handled.

There have been other bullying episodes….

What do you do? How do you respond? Take it? Fight it? Be mean? Be hated? Give up? Just don’t give a flying “whatever-word-that-starts-with-an-f?”

But I do know now that you don’t want to google for a picture of a blow-up man doll.