Kristin O’Donnell Tubb read from her almost-released middle grade novel at the Cool Springs Barnes & Noble Writers Night last Wednesday. She shared her experience of having chapters critiqued at an SCBWI conference and getting interest from the editor who did the critiquing and then requested the entire manuscript. Once she got it, the editor asked for major revisions, and Kristin complied. The editor wanted her to ratchet up the tension and build the secondary characters. A very pregnant Kristin finally got the contract call while she was at an OB-GYN appointment. Of course, she answered the phone!

Kristin reading from her new book

The manuscript went through two revisions and then through a team of copyeditors who found terms like “potholder” and told Kristin the word wasn’t in use at the time the story took place. Kristin brought all the stages of her manuscript to the writers’ group, including the First Pass Pages and the Second Pass Pages, for all in attendance to share in the process of going from those first scratched-out words to a polished and perfect product.

Kristin writes historical fiction, and Autumn Winifred Oliver Does Things Different is set in East Tennessee at Cades Coves at the time it was being made into a national park. Here’s the annotation:

“Autumn Winifred Oliver prides herself on doing things her way. But she meets her match when she moves in with her cantankerous Gramps. The Oliver girls were supposed to join Pop in Knoxville for some big-city living, but Gramps’s recent sick spell convinced Mama to stay put in Cades Cove. Folks in the Cove are all aflutter about turning their land into a national park, but Autumn’s not sure what to think. Loggers like Pop need jobs, but if things keep going at the current rate, the forests will soon be chopped to bits. And Gramps seems to think there’s some serious tourist money to be made. Can Autumn’s family and friends save their homes from the chainsaw by partnering with the slick Colonel Chapman and other park volunteers?”

The girl on the cover, named Amber, is actually from Knoxville and what an exciting opportunity for her! This book to be released October 14 by Delacorte Press brings “15 minutes of fame” and fortune to two East Tennessee girls, Kristin being one of them…before she moved to other spots and Auburn and ended up in Nashville/Franklin/Arrington. Of course, she could never go wrong with a name like Tubb, as in Ernest.

Kristin was in my CAPS writers group when she began this book, and we got to nudge it along from its earliest stages. Kristin’s enthusiasm and her energy in writing have always been inspirational to me. I sense she has learned way more in a short time from the publishing process and working with teams of editors than in all her years of reading and writing and submitting. I know her writing future is bright. 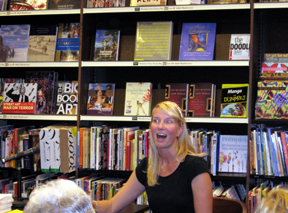